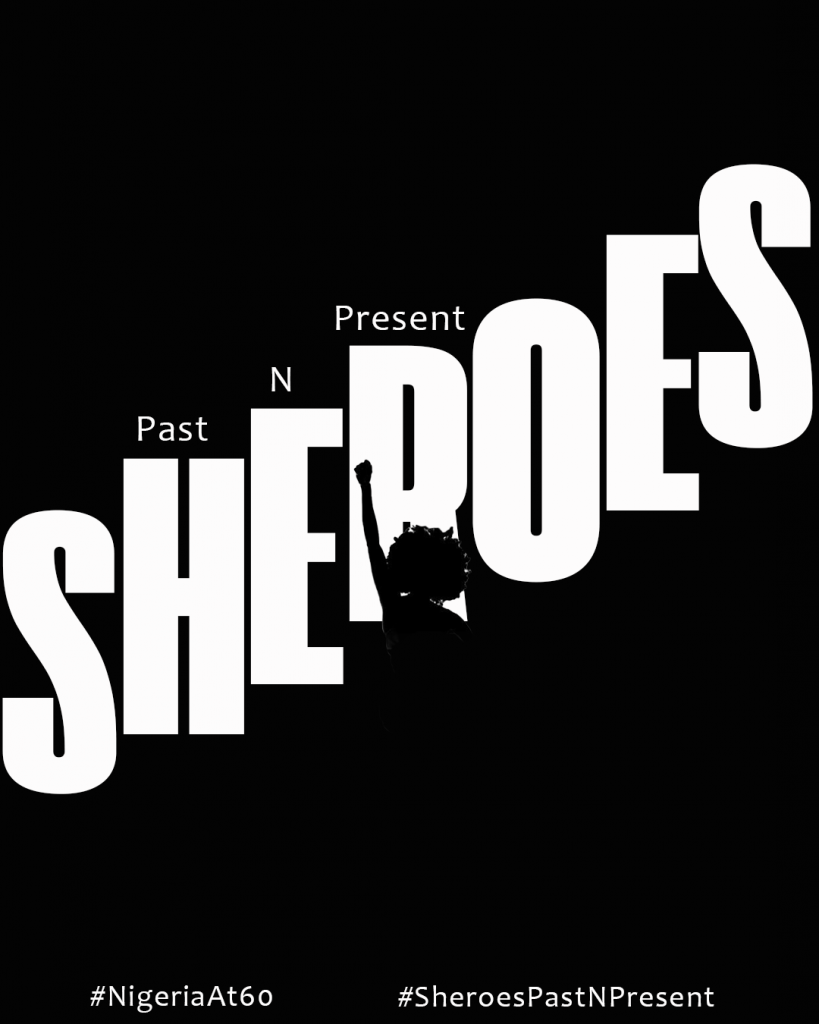 On the eve of September 30, 1960, Nigerians were ecstatic! The long years of negotiations, awakening of national consciousness, and the various carefully orchestrated revolts had finally yielded results. The dawn of the new day portended the promise of a new identity, and the retreating of an oppressive colonialist. We had won. Nigeria finally belonged to Nigerians! When the morning of the October 1, 1960 dawned, and citizens gathered to watch the lowering of the British flag and the ascent of the Nigerian flag that declared it a sovereign entity, it carried with it the dreams of  a people centuries – long shackled by the chains of slavery and colonialism now finally freed for the first time in nearly 400 hundred years to self-determine the trajectory of their collective destiny. It was truly historical.

When students of history learn about the roles of the “founding fathers” who paved the way for Nigeria’s sovereignty and fought for our identity, they rarely learned of Mrs. Grace Eniola Soyinka, Madames Nwanyereuwa, Mary Okezie, Gambo Saweba,  and their catalysic influence in shaping our independence and nationhood. They did not learn of the Egba women’s revolt and the Aba women’s revolt amongst others. What little appellation was ascribed to the likes of Mrs. Fumilayo Ransome-Kuti for instance, was that she was the first woman to drive a car in Nigeria and not the fact that she was a leading figure in a core group of women who challenged the occupying British government and its ruthless taxation schemes,  brought them to heel, and continued to be vital voices long after the British were gone. However, they did learn of the efforts of the great Dr. Nnamdi Azikiwe, Chief Obafemi Awolowo, Sir Herbert Macaulay, Ahmadu Bello, Alhaji Tafawa Balewa amongst other and deservedly so. These great men of the federation certainly did their fair bit to ensure that the freedom that Nigerians yearned for, they got. However, they weren’t sans the women folk but history has somehow managed to relegate them to the background.

Its been 60 years since Nigeria was first declared a sovereign nation. They have been turbulent years by any standards. Within the period, the country hopscotched through forms of democratic governance, through to several juntas of military rule; and in an autoimmune fashion, staggered through a civil war that resulted in the atrocious carnage of an entire generation;  and jumpstarted several  checkered walks back to democratic rule in 1999. Since 1999, we have had both the best and worst practices of democracy and participatory governance. However, at no period of democracy have Nigerians felt more disenfranchised in their own country. We have in past 20 years also witnessed a rapid shrinking of the nation’s civic space in the most ironic turn of events…

The disenfranchisement of citizens has been a recurring rights violation since independence, and continues to echo even as the nation commemorates its diamond anniversary. The right to self-governance is a right recognized in several international human rights norms. The Nigerian Constitution itself in Section 14(2)(c) recognizes and protects the right of Nigerians to participate in their own governance; and forbids the disenfranchisement of any group based on their gender, ethnicity, indigeneship, religion, or political leanings.

Contrary to the aspirations of the constitution, in a country with near equal distribution of gender, women’s leadership aspiration and participation in the public space has still not ‘come up with the independence flag’.  Rather than its much touted 35% affirmative action for women’s political participation, Nigeria continues to struggle with an average 6% of women in Senate, and 4% in its House of Representatives with impunity.  Not a single female elected state governor has emerged, or president. And it is not for lack of women trying to take their rightful place in public office – the structures barring them have gotten tighter with each election.

A pertinent question to ask is: are women’s contributions to Nigeria’s growth and development so negligible that they are undeserving of representation on Nigeria’s public table? We think not.  Nigerian women have occupied and continue to occupy the public space long before Chief Alimotu Pelewura who stood jaw to jaw with the colonial government against the discriminatory “Pullen tax”, leading the Lagos Market Women’s Association’s protest, and firmly proclaiming: “I am she who is called Pelewura…. . I will not starve in the country I was born in.”  Along with other nationalists she enabled voice and agency to citizens. She is particularly remembered for the steam she gave to the COLA strike of 1946, organizing market women across the country.  In 1929, It was the palm fronts from the women of Oloko sent across the South East and South Southern parts of the country that mobilized them more than 10, 000 strong to resist unfair taxation, setting the precedence for Abeokuta and Lagos. It was in Abeokuta that Olufunmilayo Ransome Kuti led the Abeokuta Women’s Association to resist corruption of both local and colonial government and unfair tax practices. It was their struggle that brought the first set of women into local representation. Margaret Ekpo stood shoulder to shoulder with Herbert Macaulay and other pro-independence nationalists at rallies across Nigeria.  Since she was 17, and till her death at  age 68, Hajiya Sawaba Gambo was a renowned politician and social mobilizer in Northern Nigeria.  In post-colonial Nigeria, the groundswell of iconic women has continued: Ayo Obe, as president of the Civil Liberties Organization organized and led several protest against military juntas. Obiageli Ezekwesili brought sanity to Nigeria’s government public procurement and contracting and went on to be fondly called “Madam Due Process”. She was the architecture of the Bureau for Public Procurement legislation, the Nigeria Extractive Industries Transparency Initiative (NEITI) legislation, and the new Minerals and Mining legislation during her six and a half years stint in government. Still fiercely passionate about her country, she led the Bring Back Our Girls movement growing into a global cry against insecurity in North East Nigeria. Dora Akunyili will always be remembered as the one-woman-army who fought fake drug barons to a standstill and sanitized the market. And the list goes on – Itoro Eze-Anaba, Aisha Yesuf, Dr. Joe Odumakin,  Kemi  Okenyodo, Yemi Ademolekun, Hajia Hamsatu Allamin, Chimamanda Ngozi Adichie, Osai Ojuigho, Fakhriyya Hashim, Florence Ozor, Comrade Rita Goyit, Dr. Ameyo Adadevoh, etc. All sheroes in their own right!

But the space in which these women bravely seek to hold their own is shrinking even further. Nigeria’s public space extends beyond the terrains of core politics, and participatory governance might be a more apt description for what governance ought to be in Nigeria. Beyond access to political office, Nigerians, (including their women), are in an existential battle to hold on to the perimeters of their civic space and demand participatory governance.

In recent years, the clampdown on public protests through the brutality of security forces on citizens who dare, several attempts to stifle dissenting voices particularly in civil society through draconian bills such as the “NGO Regulatory Bill”, “Hate Speech Bill”, “Anti-social Media Bill” to name a few; add to this the political parties whose structures clearly suggest that the rigidity of  ‘boys’ club’  and run in a manner akin to the mafia; add the militarization of elections, and the endemic violence that accompany them, and you have ingredients enough to drown the voices and seats of women in the public place.

The greatest irony in celebrating Nigeria at 60 in the midst of the rabid clamp down on its civic space, is that the declaration of Independence, represents one of the biggest achievements of the Nigerian civic space, alongside the return to democratic rule in 1999. And while many tales have been told of the heroics of the men who stood in dissent to ensure independence, democracy, and development, far too few stories are told of their sheoric counterparts.

We dare to prophesy that women will again be at the lead of positively changing the nation’s trajectory as it wobbles through some of its most trying times. But this time, we must not demur in according them the honour due to them, of giving them their rightful seat at the nation’s table. Discrimination on the basis of gender – official or norm must end in order for Nigeria to make any meaningful progress.

Therefore, in commemoration of Nigeria’s Diamond  independence anniversary, we will be taking a walk-through time as we unveil the stories 0f #SherosPastNPresent, whose civic activities have contributed positively to the building blocks of Nigeria. It is our hope that by looking through these  historic lenses, we will come to have a deeper appreciation of the impacts of these civic actors as constructive contributors to Nigeria’s identity.

It is time to bring our Sheroes to the fore of the conversation.