PRESS RELEASE ON THE LYNCHING OF MS. DEBORAH SAMUEL

Home/Uncategorized/PRESS RELEASE ON THE LYNCHING OF MS. DEBORAH SAMUEL
Previous Next

PRESS RELEASE ON THE LYNCHING OF MS. DEBORAH SAMUEL 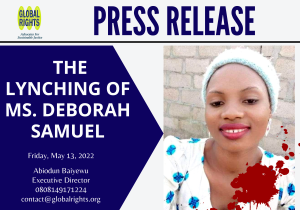 Global Rights strongly condemns the murder of Ms. Deborah Samuel, a student of Shehu Shagari College of Education, Sokoto, by students of the same institution over alleged blasphemy. We are utterly appalled by the brazen posting and subsequent distribution of a video recording of the inhumane episode across multiple social media platforms. Our thoughts and prayers go to the family and friends of the deceased in this difficult time.

This deeply disturbing action calls for a reflection on the state of affairs in Nigeria. It is an indictment on law enforcement and all arms of government when religious fundamentalists do not just confidently kill innocents despite the presence of police and security but have the audacity to film such a criminal act, post it online, and proudly admit their involvement. It is a testament to the failure of the state to put in place effective laws and implement them.

We call on the Nigerian Police Force, the Nigerian judiciary, and the state and federal government to ensure that all those involved in the mobbing and lynching of Ms. Deborah Samuel are apprehended and made to face the full wrath of the law. We remind the Nigerian government that this trend in Northern Nigeria has only continued because past victims and the families of victims have not gotten any justice while perpetrators are further emboldened by state-enabled impunity.

Without a doubt, the pattern of the government’s acquiescence to similar crimes through its complacent enablement of impunity has clearly been established. We remind the government and people of Nigeria of Shuaibu Yohanna, a Pastor killed on the 22nd of September 2021, in Kano state; Bridget Patience Agbahime, a 74-year-old street vendor of Christian faith, beaten to death on the 2nd of June 2022, in Kano state, by an angry mob allegedly for blasphemy, and Methodus Chimaije Emmanuel, a 24-year-old street vendor who was killed in a similar pattern on the 29th of May 2016, in Niger state, also after being accused of blasphemy.

We reiterate our call to the Sokoto state government, the federal government and the Nigerian security agencies to bring to bear the full force of the state’s justice system on the killers of Ms. Deborah Samuel and ensure their prosecution to the full extent of the law. Nigerians must unify in demanding justice for Ms. Deborah Samuel and demand an end to endemic state-enabled impunity for crimes committed under the guise of religion.

We urge the government at all levels to take tangible and urgent steps towards fulfilling their constitutional mandate of ensuring the security and welfare of all citizens and protecting the right to life, freedom of thought, and religion by demonstrating political will to end religiously motivated, and other forms of lynching and the practice of jungle justice in dealing with actual and perceived crimes in Nigeria.

The rule of law must prevail in Nigeria, and the Constitution must be respected as the grundnorm. Citizens must therefore desist from taking laws into their own hands and delivering their own brands of justice. The government must act and act fast! 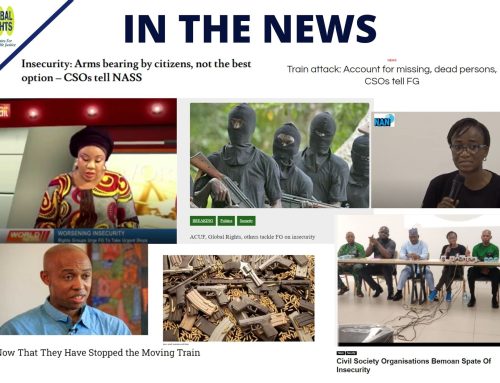 Secure Nigeria, Account for the Missing and the Dead

Secure Nigeria, Account for the Missing and the Dead